To support the completion of the 200-mile Emerald Network, the Greenway Partners Program selected 6 community partners to receive capacity-building aid in advancing proposed greenway projects for 2016.

Through the program, LivableStreets will provide technical assistance for a 12-18 month period. This support is customized to fit the unique opportunities and challenges posed by these communities, and includes (a mix of) community engagement, design concepts, commissioning feasibility studies, hosting community workshops, and building public and political support.

For the next round of Greenway Partners applications, please check back in Spring 2017. 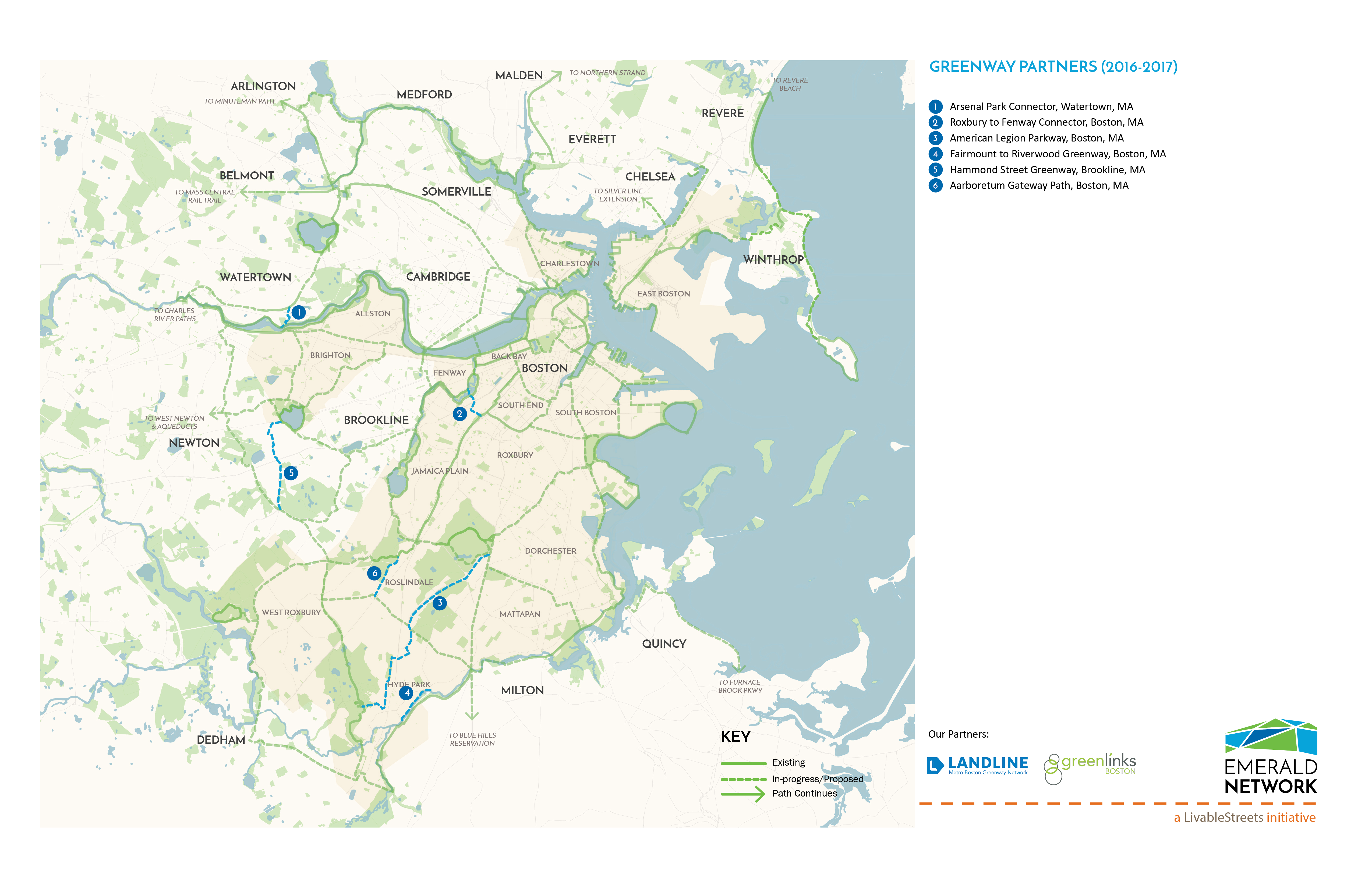 The Arsenal Park Connector is a path that aims to connect the dots at the end of the Watertown Spur to the Paul Dudley White Path along the Charles River thorough Arsenal Park.

The Watertown Bicycle and Pedestrian Committee works to improve the bicycling and pedestrian alternatives within the Town for commuting and recreation. Officially commissioned by the Town in 1995, the Committee is composed of volunteer residents appointed by the Town Manager.

The Roxbury to Fens Connector would link two of the most significant and well-used public spaces in the city, the Emerald Necklace and the Southwest Corridor. This connector aims to enhance accommodations for pedestrians and bicyclists along Ruggles Street, Parker Street and Forsyth Way, not only to travel between one destination and another but to improve access for the communities around it.

The American Legion Greenway is a future greenway that follows the American Legion Highway and connects the various public and semi-public green infrastructure segments and open spaces along it. The greenway would also create a critical north-south connector that would provide options for alternative modes of transportation.

The American Legion Corridor Coalition (ALCC) is a coalition of residents, community nonprofit organizations, parents and teachers, and businesses along the American Legion Highway/Parkway including several adjacent pocket neighborhoods. The coalition spans five of Boston's 'towns', from Dorchester to Hyde Park.

The Fairmount to Riverwood Greenway is a future greenway that would connect the Fairmount Commuter Rail Station to the Riverwood Shopping Center and fill the gap in green infrastructure along the northern edge of the Neponset River.

Formed in 2001 by concerned residents, the Southwest Boston Community Development Corporation serves the communities of Hyde Park and Roslindale by preserving affordable housing and promoting economic development. In Hyde Park, it has focused on transit-oriented development, targeting vacant and underutilized lots near the Fairmount/Indigo MBTA Commuter Rail Line. The Southwest Boston CDC is also focused on community organization and leadership development of adults and youth. Its Green Team program addresses multiple needs, by training youth in leadership skills as well as participating in urban green space restoration. For more information about the Emerald Necklace Conservancy, check out their website.

Dedicated bike lanes in the short term and a true parkway with separated walking and bicycle tracks in the long term, the Hammond Street Greenway would enhance connectivity and mobility choices along a street dotted with parks, greenways and single family homes that are bordered by the Green Line.

The Brookline Bicycle Advisory Committee advises the Brookline Transportation Board on issues related to bicycling in Brookline. Members are appointed by the Board to serve three year terms. The committee's mission is to encourage, plan, advocate for, and advise concerning bicycling in the Town of Brookline. It advises the Transportation Board on matters related to cycling for commuting, general mobility and pleasure, with an emphasis on safety, public education, and bicycle accessibility.

The Arboretum Gateway Path would connect a large section of the community to the surrounding Arnold Arboretum and Forest Hills MBTA Station, through the Blackwell Path. Additionally, the path would create low (to no) cost mobility options for people between the Roslindale Commuter Rail Station and the T Station.

WalkUp Roslindale is made up of residents who live, work, or simply care about Roslindale and intend to make it the most pedestrian-friendly neighborhood in the City of Boston. They envision Roslindale as a safe, pleasant, and beautiful place to walk, gather, and interact for the young, old, and everyone in between. Their approach to improving the human environment is comprehensive and holistic: development, design, infrastructure, culture, social norms, and law enforcement. Although their starting point is people on their feet, they will work with allies to improve the neighborhood for bikes, other non-motorized forms of transportation, as well as mass transit.