From Piers Park to Wood Island Bay and Constitution Beach, the East Boston Greenway is a two-mile linear park that connects people of all ages to East Boston neighborhood amenities, Boston’s largest salt marsh, and other important public waterfront areas. One of our very first Greenway Stories explored the success and challenges of this greenway -- you can read it here.

EN: Friends of the East Boston Greenway has been active for more than two decades. Is this the first time they’ve hired a Greenway Coordinator?

MM: The Friends of the East Boston Greenway (FoEBG) had staff support from the Boston Natural Areas Network (BNAN) for many years. With the merger of BNAN and the Trustees of Reservation in 2014, the model changed and that staff support was no longer available. Gretchen Rabinkin (now with Boston Society of Landscape Architects), stepped in to help coordinate the group for a couple of years, and now with generous support from Barr Foundation’s Waterfront Initiative, the group was able to create the coordinator position. I’m in good company, as the grant also allowed the Friends to hire Kannan Thiruvengadam and Chris Marchi to help build partnerships, add placemaking to the Greenway, and engage residents with the creation of the East Boston Greenway Priority Plan.

The foundation of Friends of the East Boston Greenway is an active group of East Boston residents that meet monthly at the Greenway Council meetings to plan, discuss progress, and work on issues along the Greenway as they come along.

EN: How can having someone in a formal position like the Greenway Coordinator help a small non-profit group like FoEBG succeed?

MM: A project manager is really mission control -- there to help streamline everything -- from coordinating meetings, sending out minutes, writing documents about the project, drafting timelines with To-Do’s, attending community meetings, arranging meetings with stakeholders, and keeping everyone informed and on track. The women that make up the FoEBG Executive Committee -- Karen Maddelena, Patty DAmore, and Mary Ellen Welch -- have great institutional knowledge and successfully navigated the Friends across many transitions in city and state leadership (Boston Parks Department, Massport, DCR) to see the greenway get built. The Friends has been meeting for 25 years to work on creating and stewarding the Greenway. I get to use my experience to help the Friends and residents identify and capitalize on key opportunities that will improve the greenway and help more people connect with it.

EN: What experiences do you bring to the table that will help you in this role?

MM: My experience as an urban planner and  project manager centers on greenways, placemaking, and working directly with communities. From community visioning and writing plans, to programs and maintenance, I focus on ensuring long-term sustainability. I currently also work on the proposed  9-mile Fairmount Greenway. I previously worked maintenance at the Rose Kennedy Greenway and the MA Horticultural Society, so I know how important it is to create clear direction so this work gets done.

For example, FoEBG recently had a meeting with Chief Chris Cook of the Boston Parks Department that generated a long list of ideas. By organizing the list into routine maintenance, seasonal projects, and long-term capital projects I created a document that makes it easier to pass along maintenance to staff and communicate specific needs to partners.

In addition, working closely with FoEBG and residents is key since they provide a lot of local expertise and history that someone new to the Greenway wouldn’t necessarily know. This is why it’s key for me to listen and ask questions.

EN: What are some of the specific challenges and needs of the East Boston Greenway?

MM: The issue of flooding is mentioned a lot. It's caused by stormwater, drainage from abutting properties, parking lots, and a backed up sewer system on the Greenway. The Parks Department has worked on fixing with their pipe system, but climate change and rising sea levels continue to make this an ongoing issue. Improving wayfinding is also an area of concern. A surprising number of people in East Boston don’t know about the Greenway.

FoEBG has partnered with the Boston Society of Landscape Architects (BSLA) and the Mystic River Watershed Association (MyRWA) to expand outreach and events along the greenway. Last summer they hosted a market, trike bikes for seniors, a community survey and bike counts and there will be more programming coming in the spring months as we want to gather public feedback to help outline a priority plan. Right now there’s a design challenge happening for the section of the greenway at the area of the Gove Street crossing (click here to learn more!)

EN: What advice would you have for other individuals/groups looking to start or advance a greenway project?

MM: Meet regularly! Listen, assign clear roles, and follow-up with a committed group of residents who support the greenway concept. There’s a lot of experience in Boston around greenways, so talk to other groups who have had success -- Neponset Greenway Council, Southwest Corridor, Mystic River Greenways, etc. -- they know what it takes to make these projects happen and the various city and state players. Getting some sketches, renderings, and lines on maps early on is a great thing to have for initial buy-in and public support. 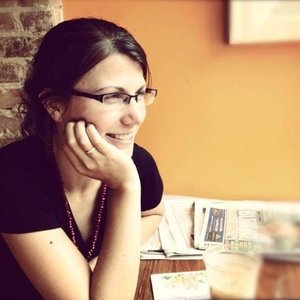 Michelle Moon is an urban planner who works on greenways, parks, placemaking, and active transit projects in collaboration with community-led groups, nonprofits, and local governments. Michelle is currently the project manager for the Fairmount and East Boston Greenways in Boston. As co-founder of Civic Space Space Collaborative she is working on improving other public spaces in and around Boston. Previously she worked on the Watertown Community Path, at the Rose Kennedy Greenway Conservancy, The Esplanade Association, and The Trust for Public Land. When Michelle is not working, you can find her biking around greater Boston or hiking in the White Mountains.

If you liked this post, consider reading more about greenway projects in this area: