To support the completion of the 200+ mile Emerald Network, the Greenway Partners Program is providing 4 community partners with capacity-building aid to advance proposed greenway projects.

Through the program, LivableStreets provides technical assistance to each of the four partners. The support is customized to fit the unique opportunities and challenges posed by each community, and includes a mix of encouraging community engagement, developing design concepts, commissioning feasibility studies, hosting community workshops, and building public and political support. Read on below to learn more about each of our current partners and our priority public projects. 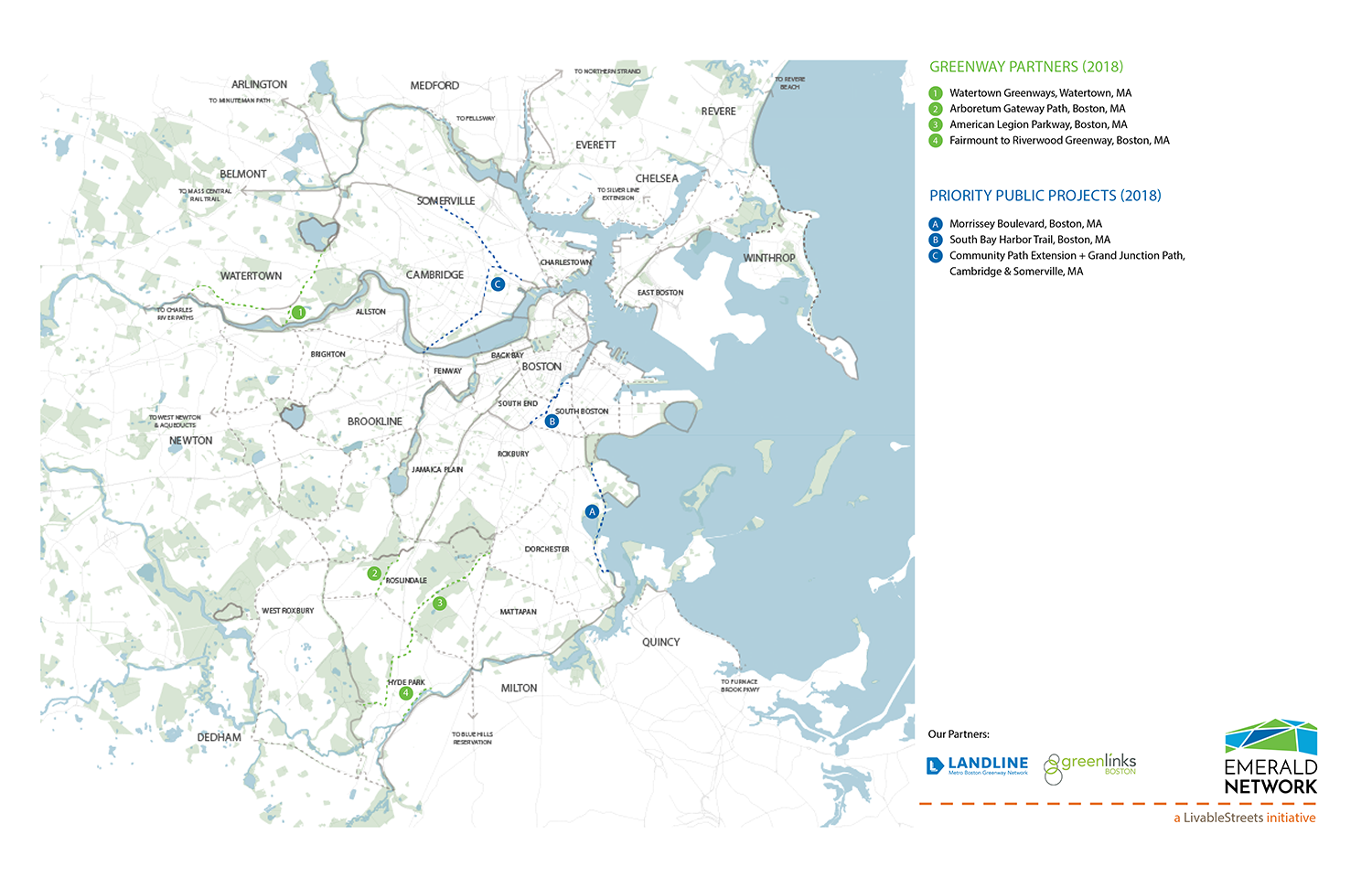 The Arsenal Park Connector will close the gap between the end of the Watertown Spur and the Paul Dudley White Path along the Charles River thorough Arsenal Park. View the Watertown Regional Connections map on our resources page.

The Watertown Bicycle and Pedestrian Committee works to improve biking and walking alternatives for commuting and recreation. Officially commissioned by the Town of Watertown in 1995, the Committee is composed of volunteer residents appointed by the Town Manager.

The Arboretum Gateway Path will connect a large section of the community to the surrounding Arnold Arboretum and Forest Hills MBTA Station, through the Blackwell Path. Additionally, the path will create low cost mobility options for people between the Roslindale Commuter Rail Station and Forest Hills Station. Read the summary report for the project on our resources page.

WalkUp Roslindale is made up of residents who live or work in, or simply care about Roslindale and wish to make it the most pedestrian-friendly neighborhood in the City of Boston. They envision Roslindale as a safe, pleasant, and beautiful place to walk, gather, and interact. Their approach to improving the human environment is comprehensive and holistic: development, design, infrastructure, culture, social norms, and law enforcement. Although their main focus is on pedestrian access, they are keen to improve the neighborhood for bikes, other non-motorized forms of transportation, as well as mass transit.

The American Legion Greenway envisions a transformation of the American Legion Highway that connects the various public and semi-public green infrastructure segments and open spaces along it. The greenway would also create a critical north-south route for non-motorized modes of transportation.

The American Legion Corridor Coalition is a coalition of residents, community nonprofit organizations, parents, teachers, and businesses along the American Legion Highway/Parkway including several adjacent pocket neighborhoods. The coalition spans five of Boston's 'towns', from Dorchester to Hyde Park.

The Fairmount to Riverwood Greenway will connect the Fairmount Commuter Rail Station to the Riverwood Shopping Center and fill a gap in green infrastructure along the northern edge of the Neponset River.

Formed in 2001 by concerned residents, the Southwest Boston Community Development Corporation serves the communities of Hyde Park and Roslindale by preserving affordable housing and promoting economic development. In Hyde Park, it has focused on transit-oriented development, targeting vacant and underutilized lots near the Fairmount/Indigo MBTA Commuter Rail Line. The Southwest Boston CDC is also focused on community organization and leadership development of adults and youth. Its Green Team program addresses multiple needs, by training youth in leadership skills as well as participating in urban green space restoration.

LivableStreets is building coalitions and conducting strategic outreach to build support for key public projects in various sections of metro-Boston. The projects were identified through a meticulous rubric for prioritization, and expected to be built in the next 5 years. 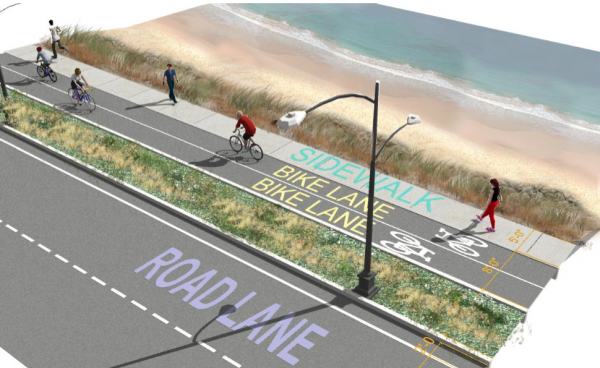 This is an on-going redesign for reconstruction project overseen by the Department of Conservation and Recreation (DCR). Once complete, this section will significantly improve greenway connectivity between Mattapan, Dorchester, and the growing employment hub in South Boston. Additionally, it will extend the widely popular Neponset River Greenway all the way to Moakley Park. It will also improve safety and connectivity to the coastline for many communities that live along this roadway that acts as a geographic divider in its current form. Learn more about the project. 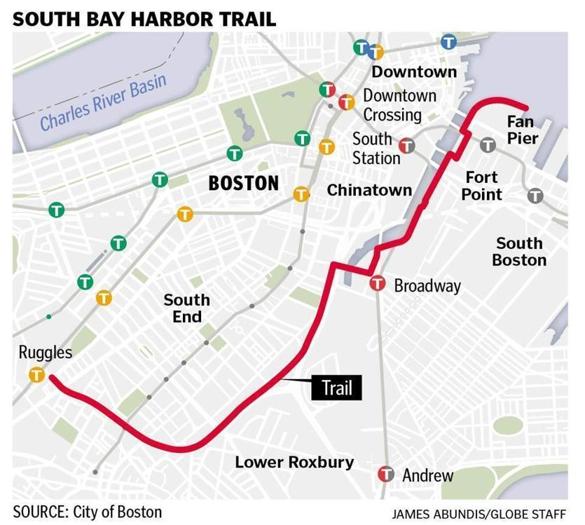 This is an active Boston Transportation Department project, supported by MassDOT with a few segments built and another anticipating construction starting in Spring 2018. Once complete, the South Bay Harbor Trail will be a continuous connection between Ruggles MBTA Station and the Harborwalk at Fort Point Channel improving greenway connectivity between Longwood Medical Area, Roxbury, South End, and South Boston. Learn more about this project. 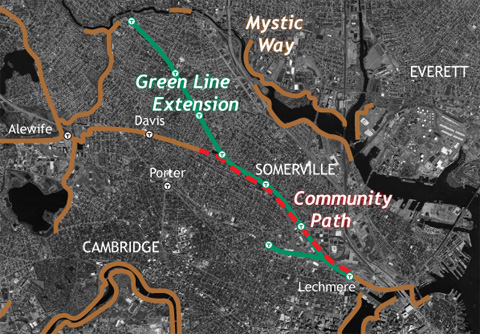 MassDOT recently made an announcement to build the entire missing segment of the Community Path between Somerville and Lechmere MBTA stop in Cambridge. Grand Junction path is being actively designed by the City of Cambridge with a few pending issues. Through the Emerald Network Initiative, we are advocating for seamless connectivity between the two potentially iconic greenways and across the Charles River into Boston – unlocking more than 50 miles in connected trails. Learn more about this project.